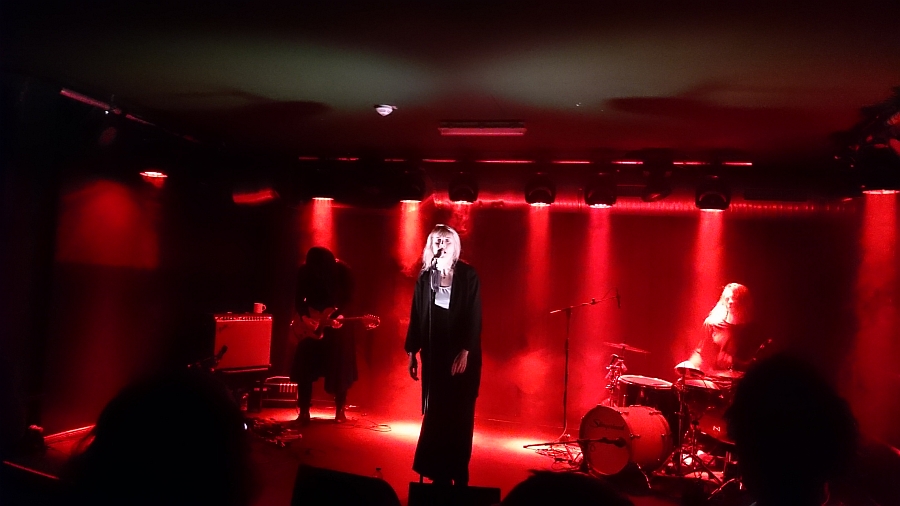 And that’s not something I would learn somewhere in Northern Ireland, where I come from.

The story of your founding is, that Michel and you met each other in the underground at Rosenthaler Platz?
Rosie: Yes.

How did Louis come to the band?
Rosie: We just met him at the Mindpirates e.V. We kind of knew him from around and we saw him playing at the Mindpirates with one of his other bands called „Ornis“ and we thought that it would be really cool and just asked him to come over Christmas 2012. We asked him and he said „Yeah!“. We had a lot of drummers before Louis, you know. Many many different drummers. You always have to search very hard to find musicians, that’s one of the biggest things being in a band. Finding the right people takes a long time, I think…

But it works obviously.
Rosie: Yes.

This is your first Album as „Ballet School“. Another one follows?
Rosie: Sure. Our Label will let us do another one. This one’s just been out for two months so it will probably be for a while, but I can’t wait. We want to push everything forward all the time and we’re just a very small band, you know. There is nothing like expectation or anything.

So, you don’t feel any pressure from your fans or label?
Rosie: No. (Lacht)

You want to push things forward, but you’re also kind of relaxed about what will happen in the future?
Rosie: I’m always conscious and want to do something good or better. So I wouldn’t say I’m too relaxed about it, I’m definitely always ready. As soon as I come back to Ireland, I’m gonna write something. The main thing I want to be is a song writer and write songs for other people, not just for me and this project. I think being a writer is one of the coolest jobs a woman can do in this industry. And I really think that there are some incredibly gifted female writers out there and I know it’s a career for women, it’s not so much about tits and ass and so I’m always like „Okay, make sure you write things.“

And you still got the energy after that tour?
Rosie: Yeah, it’s stressy but writing is definitely a relaxing thing. Michel always says we should write while we’re on tour and that’s right, we should do that, but we still haven’t got that kind of… when we’re on tour, we don’t have a nightliner and stuff, you know what I mean?

Yes.
Rosie: We’re still on the lowest level of touring, we’re touring in a Van. It’ll be fun to just write again.

Sounds nice to write for relaxing and that you don’t feel any pressure.
Rosie: Oh yes, that’s very good.

Do you read everything that is written about the band?
Rosie: No, I don’t read any of it, because when I was a little kid I was kind of obsessed reading about my favorite bands and I loved the Interviews and the cool quotes of the artists, but I don’t know if that’s… (überlegt.) Whenever the tables turn and you’re the one who’s getting written about, so often you don’t recognize yourself in it.

I think, I can imagine what you mean.
Rosie: Like there is always a kind of a distance, like a prison. Everybody has something, that they want to say, but the context is so difficult all of the time in music journalism and there are so many blogs now.

YES!
Rosie: You really won’t find good writers, you know. And whenever you give an interview it’s not about the artist, it’s about the writer. How cool the writer is.

Ah, okay…
Rosie: But all of the time some writers aren’t really good. (Lachen.)

Well, you know, I’m just doing interviews for our blog, because writing about music and art is very subjective and hard to do, so I can imagine that there’s a lot of not that good stuff out there.
Rosie: It’s weird, because „Ballet School“ has a very intense backstory, that isn’t really written about very much, because I haven’t really found a comfortable way to talk about it and I’m really trying to find a comfortable way to talk about it with journalists. It’s so odd, the context is so artificial, that it’s a really difficult thing to do. What you need is media training where they teach you how to tell your point of view. Personal little snippets and how to suggest great depth… a part of me finds it’s bullshit, but… You know, I had such a crazy life, that there are no words. So how to set it up in any way that’s gonna communicate a true meaning in the context of a music magazine interview? So, I don’t know. Unless you say things that are purposeful and solicitous. Or you give an opinion that is extremely controversial about something that’s a taboo, but that’s not my fucking style, you know? So what do you do in that situation?

The question is: Do we need it? Do the people need to know the „Mystery of Ballet School“, if it’s so intense and hard to tell for you.
Rosie: Personally I think you need to tell the story, because you’re giving yourself a platform. You’re standing on it and you say „I have something to say!“ and then you don’t say anything? That’s stupid! But a lot of artists would disagree with that and say, that it’s good to imply meaning rather than be so open all the time, but I don’t know. „Ballet School“ is more real than that. That’s too pretentious for me. We’re not like „We don’t do Interviews. Nobody knows, who we are! Nobody ever has seen our faces!“ Yeah, that’s because you’re really boring, you know what I mean? When I give an interview I try to think of the fan that I am trying to reach. It’s probably someone who’s pretty young, probably gay, really likes Pop Music, but also has a real good taste.

I’m pretty sure you have a lot of fans like this.
Rosie: I really hope so. I thought for too long that the way I sing is too much. I thought, that in Rock Music I can’t sing the way I sing and I always sang in guitar-based bands and I always thought „Oh my god, how do I make a leader in a band and use my real voice?“  I was 18, living in London and completely emersed in the gay culture there and learned how not to give a fuck, if you know what I mean?

Yeah.
Rosie: And that’s not something I would learn somewhere in Northern Ireland, where I come from. That doesn’t exist there or didn’t when I was a teenager and you know, a girl like me. I always felt embraced by the gay underground and my best friend, the director of a couple of our music videos, Cathal O’Brien, he taught me how to dance and he always was very encouraging to me about singing and he showed me what a diva is… A diva is not someone who puts on Beyonce faces all the time (Ich fang an zu lachen.). A Diva is tragedy… people like Maria Callas for example.

Yes, there were a lot of real divas, who were…
Rosie: There’s always tragedy in it, isn’t it?

Well, I think being a diva is not as easy as some people think. Lady Gaga thinks she’s one, but she’s not.
Rosie: It’s not about just making demands.

I know what you mean, being a diva is something you can’t enforce.
Rosie: Yes, it’s always a female and there’s always something in the voice that’s somehow frightening, it’s in the tone and you can see a sadness in there. It’s interesting to be singer or to be someone who’s compelled to sing and you have to take care of your voice all the time, especially on tour. And you’re trying to get sleep and stuff. This part of me that is driven to do that is beyond all logic.

It just has to be?
Rosie: Yeah. And I know it’s because of the tragedy that I lived though in my life and that’s it! There is no other reason that you would hold on to this. It’s so hard, but past all reasons, I hold on to it. And we’re so tired and struggling, but you’re compelled to do it and that’s something that I want and I think, our fan base doesn’t know about us and I want to make a connection. Personally I think that’s more interesting than how we met in Berlin or if I like Madonna. That’s not what we’re really about. What happened was: I was singing my whole life in a small town and I wanted to do this and I never had the confidence and then, in my mid-twenties, my mother died and I decided that I’m gonna change my life completely. I don’t even know if it was the right thing to do, I still look at it and ask: „Did I do the wrong thing?“ But I was just so full of grief, that I just did that crazy thing. I moved over to Berlin to work on music with some producer, who just said: „Come over here, we will do this!“ You know, it was just crazy and it didn’t work out and I started this band instead. I lost both of my parents and it’s been out of that grief, that I had the drive to do this, it’s a stand, because I don’t know what else to do.

Okay.
Rosie: I don’t know, I’m just asking myself that question every single day. „How do you recover from this? How do you live on?“ And it happens to everyone! What does it have the fuck to do with how my hair is done? Is not about the fashion we are wearing or which fucking famous person just said hello. You know what I mean?

Yeah! You just have to go on, it doesn’t matter who you meet. These things happen and it’s your life and you have to do what you have to do, you know? Life is just going on and on and it will be better someday. And yes, it doesn’t matter who you met, what matters is, that it works for you!
Rosie: Maybe I’m just bad at dealing with life, I don’t know… But whatever it is, it brought me to this point and that’s the situation and we just have to do what we do.

Yeah, you have to go on. And honestly: Nobody deals really good with this side of life. I don’t know anybody. Even with people, where you think, they’re so cool with everything at first are often helpless. They set limits for themselves, because they don’t want to let their dark side out, so I often think, that those people can’t really deal with life. When they just move on as if nothing happened.
Thank you for the interview.