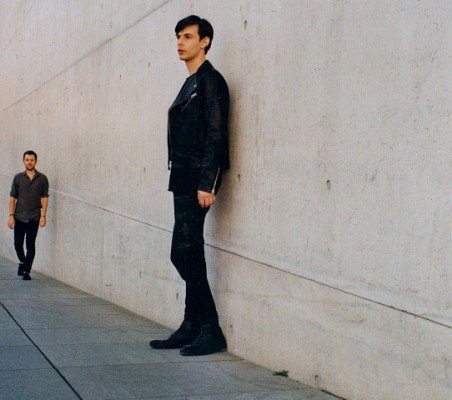 There are too many people who build their personality around Berghain and clubbing.

Hello! I thought, you’re alone.
Luke: At the moment I’m writing most of the music like with the first EP, which I wrote and recorded by myself, every part piece by piece. But then I needed someone else to grow the sound with and this is when I met Jonny. I found him on Craig’s List. He’s also from Melbourne but we didn’t know each other there. I mostly got a bunch of weirdos on Craig’s List, and then Jonny was the one good guy. I started playing live with him and he has become a very big part the whole project – we are now like a partnership. It’s great to have him, he’s really good with the technical things while I am more comfortable with the songwriting side of things, so we make a good partnership.

I think, the sound and the lyrics work very well. Was it hard to grow a companionship?
Musically or personally?

Both.
Musically it wasn’t that hard because we have a very similar taste and background in music and that’s very important. But also… I mean, when you play in a band with someone, you have to spend so much time with each other, getting to the venue, set it up, waiting for hours, so you really have to be comfortable with them to be not annoyed by each other.

And you get to know each other very well…
Exactly.

The first videos you made are old movies from an archive. Where did you find it?
All are from free archive footage. They’re a few websites, public domains. I just searched for hours and hours when I was on holiday in Australia and I had a surgery on my foot, so I was just at home with my girlfriend actually and started a catalog of clips and I just cut them up and at the end I was very pleased on how good it looked actually. It fits to the music a little bit, but not too literally.

You really get the mood.
I’m glad, it works.

I also like the other one shot in Berlin. There are so many films of Berlin and I find it nice that you as an Indie-Band chose a clear view of Berlin and not all the fucked up or dirty places, not the Berghain or whatever.
There are too many people who build their personality around Berghain and clubbing. This sort of thing can be a bit of fun, but it also gets boring really quickly.

Yes, that’s why I like that you chose the clean architecture at the Regierungsviertel and other places.
I think, the architecture is beautiful, it’s amazing, so there in the combination with the area next to Teufelsberg… I think, they’re really nice locations.

You’re from Australia and how long are you in Berlin?
It’s four years now. Feels like a very long time. It was just by accident, I’ve been here for holiday and then I met a lot of cool people and then I actually met my girlfriend who is also from Berlin and I’m doing a masters degree at FU, so I have many things keeping me here.

And how long are you at your Label „Motor Entertainment“ now?
With „Motor“, it’s pretty fresh, two or three months.

But you as Creatures exist since 2010, right?
No no no. The first release was two years ago. We formed in 2012 and then we released something in 2012.

So, I mixed something up, I’m sorry! Can you imagine to do a tour in Australia?
We have actually played in Australia! When I first met Jonny, it was a really good timing, I visited my family in Melbourne and he was going to his family, just by chance. Because it’s very expensive to fly there. So we were both there at the same time and we wrote our favorite venue in Melbourne and they were really happy to take us and we played a really nice show and there were a lot of our friends. It’s one of our favorite shows we did actually. It’s a very special venue with an amazing sound and it was nice to do that. Eventually it would be cool to go on tour there, of course. Would be cool to go everywhere! At the moment we play mostly just in Berlin, so we’re looking forward to branching up to other cities and all the countries to meet new audiences.

It will happen. What would you say is your biggest influence?
Other musicians and artists?

Maybe you would say you’re more of a poet with a little bit of music in you?
(lacht) It’s nice to think of me as a poet. I mean, words are definitely important to me, that’s what you mean for sure. It’s not a matter of I write a song and the music’s on top, they’re definitely equal. One should comfort the other in the right way and one should help the other to do what it needs to do. So, I think melody is what draws the people in quickly and the words are supposed to catch them and hold them there for a long time.

From Greece With Love – Elektro Mixtape