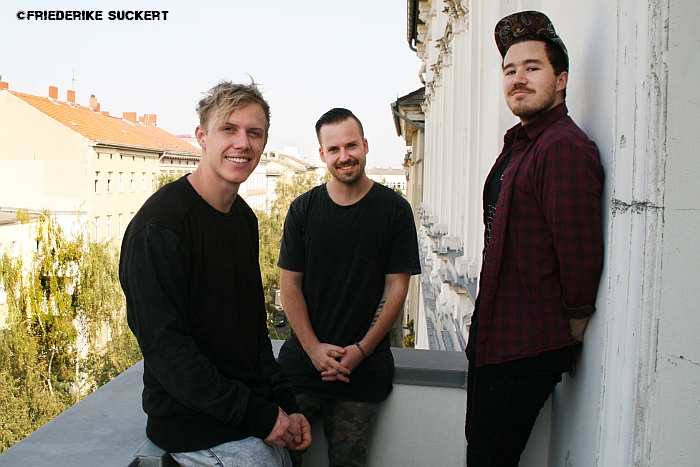 In Europe they really love the music and they’re more for themselves, they don’t want to impress anyone.

Who the fuck is Sarah?
Jon: That’s a good question! When we were writing that song, it wasn’t even a song about a break-up first. It was just about losing someone you love.

So there isn’t a real Sarah, Sarah is just a synonym?
Jon: We all have a Sarah, but it’s not her real name.

Okay. The name of your band is RÜFÜS DU SOL in North America, why?
Jon: We released the album in Australia originally and it did so well that we wanted to release it internationally, which was so great for us at that time, but we had to rename the band for America because there is a RÜFÜS from the early 70’s.

Also with Ü?
Jon: No, we just had to change it and changed it into RÜFÜS DU SOL. It still says what RÜFÜS is about.

Where did you all meet?
Jon: We met in Australia. Actually through my little brother. My little brother´s best friend Tyrone, who’s the lead singer, and James, the drummer went to the same school, so we knew each other growing up, doing different things and we sort of all realized, that we all like the same sort of music and to make music so we came together to form RÜFÜS.

Do you like touring? Is it still nice or is it starting to get stressful?
Jon: I think it goes through waves all the time. It just depends on where you’re at, like how far on the tour you are. But I think, most of the time, it’s exciting. You can’t help being excited when you’re going to new places and you are seeing new crowds. So I’d say ninety percent of the time you’re extremely excited, but you can also be extremely exhausted. Most of the time it’s too hard not to love it.

Do you need a lot of time to rest and wait for new inspiration after such a long tour?
Jon: Yeah, I think we had our first big break a few months ago which was really well-needed by that point just because we’ve been touring for such a long time and it was really good to re-energize. Just to find ourselves again and we just started writing again. We feel fresh and are really happy that we took that time. It was really important.

And what about songwriting – do you sometimes write while you are touring? Your tour seems to be a real big tour and maybe it’s hard to separate?
Jon: I think, we’re trying to do that a little bit in between, but because we had that time off before the tour, we’re fresh and it’s not that hard to do it at the same time, but to do that at the end of a tour would be very exhausting.

Yes, I saw a video on Youtube about your last US-Tour and there you said, that you had three gigs on one day. It seems quite a lot to me.
James: It was pretty intensive.
Jon: Those were pretty intense circumstances.

You’ve been at the Berlin Festival. Was it nice? Shame on me – I missed your show.
Jon: It was fun.

You’re in Berlin for three weeks now. Is it a kind of homebase?
Tyrone: We’ve been here for two weeks now and then we’ll be in the US, The Netherlands, Belgium and the UK and in winter we will come back for six weeks.

You want to experience a winter in Berlin? That’s really brave! Good luck.
(everybody’s laughing)
What’s the difference between touring in Europe and the USA?
James: The difference is the crowds you’re playing for. You notice straight away when you’re going to different places the different reactions. Some people are more hesitant to get on the dance floor. In the US they’re pretty ready to get on the floor. That gives us a lot.
Jon: The reactions of the crowds are really different. In Europe they really love the music and they’re more for themselves, they don’t want to impress anyone. It depends on the crowd, but that’s a generalization we can make. In the USA they more want to enjoy it together.

I can imagine that in Germany they’re all more for themselves than maybe in Spain.
Jon: It’s really different. And it’s interesting to see how different all the crowds react.