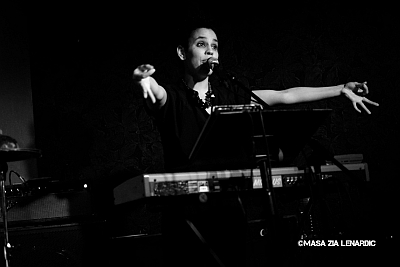 What a cosy location and what an incredible performance. That is the shortest expression of my thoughts according to Xenia Rubinos concert at the Monarch! But here comes the detail:
I entered the Monarch not knowing anything or at least that much about that crazy girl and her drummer that were supposed to play this evening. I was excited because it was not my type of music but wait – what kind of music is it exactly? Hard to tell but after two songs it was impossible not to move to it. I guess this is the perfect moment at a live performance – when the beat gets through your body and you have to get closer to the stage and suddenly you are under the music’s spell. After the first song there was a little interruption with technical problems and there were just a hand of people sitting around – but after that growing pains it was such a consistent and thrilling performance.

Xenia and her drummer are terrible charismatic and the music is kind of experimental and unpredictable because whenever you thought “ok, here is the beat and I can move to it” the rhythm changed or without any instrumentals she started to sing and to experiment with her voice. But this was the magic about the concert and this made it that special. By the way – if you don’t want to have fun and to smile: keep away from the stage and from Xenia because her smile and acting is so positive and truly contagious. I experienced it.

It’s a shame that the Monarch wasn’t full of dance-crazy people because the artist deserved it so bad.  But it was her first concert in Berlin and I really hope it was not the last. So next time I expect a huge crowd of people and as they won’t be able to stand still. It will be an awesome chance to dance our hearts out!

PS.: Thanks a lot to Masa Zia Lenardic – she took the wonderful photos and shared them with us!