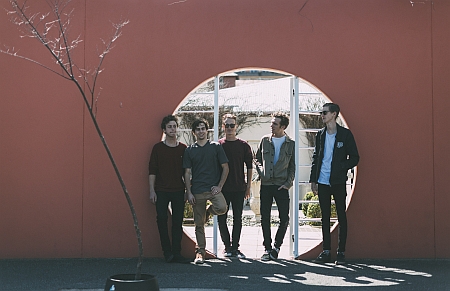 You just have to be a little bit clever about the way you approach things.

Well, the weather is very nice. Thank you for bringing it with you. I expected more from guys from Australia…
Tora: We try our best.

How was your concert?
Tora: „Best Kept Secret Festival?“

No, I mean the Berghain thing.
Tora: Actually, that was last month.

And so did the festival?
Tora: Yes! Absolutely awesome.

Were you impressed?
Tora: Yeah! The most impressive band was, obviously Alt-J, but I knew that, I saw them before. But there was another act: Typhoon. They’re a Dutch band and the crowd loved them. There’s so much energy in this guy and they loved it.

Nice! Well, you are a new band and I couldn’t find out why you chose the name Tora.
Tora: It means “now” in Greek.

Aaaah! And where did you all meet?
Tora: At school. We know each other since we were very young. Some of us are step brothers as well. So we’re all strong friends and it’s like a family. And the music is a result of our friendship.

You always did a lot together?
Tora: Not always, but we all definitely had a passion for music. It kind of happened two or three years ago that we started to play together.

Okay, you started two years ago, you released your first EP one year ago: so it all went very fast!
Tora: Yeah, exactly. Everything seems to go into one direction. We’re very happy. We worked quite hard and now it’s working out how we wanted it to.


Do you need to tour a lot, in Australia or elsewhere?
Tora: We’ve only done three tours actually in Australia. Because it’s such a big country with not many people, it’s hard. You have to travel so far to get the audiences. Sometimes you drive ten hours straight after a show on to the next show and play again.

Yes, she’s in Berlin right now, can’t be a coincidence.
Tora: Hahahah! Yes, for sure. Some scones… We will have a high tea with her.

Hehe. Do you have a Plan B if this all doesn’t work out?
Tora: No. We will all keep on working until it works. It’s working now. At this stage it just keeps us alive. I think if we keep on doing what we’re doing, in a few years we should be much better off.

Did you hear about the letter Taylor Swift wrote to Apple?
Tora: No, only a few headlines.

So, okay: Apple will start a music streaming service like Spotify and as a new subscriber you don’t have to pay for three months. During those three months, Apple didn’t want to pay the artists whose music was being streamed. So Taylor Swift wrote an open letter, saying that this wasn’t fair, especially for young artists, after which Apple agreed on paying them. Taylor Swift doesn’t want any of her songs to be available on streaming services. Do you think, you as a new band, could do that and say no to something like this?
Tora: No! We’re really giving away our music by Soundcloud anyway and I think we all kind of agree that we want to give our music to the people. First of all because we want to know if they like what they hear. First you have to hear it before you buy it. To us it’s a little bit different, because we all own the recordings and the music ourselves so we actually do make a little bit of money with Spotify. Although we’re not a huge band, we all do get a good income, because there’s not a label taking all the money from Spotify. So it works for us and it’s okay.

Don’t you think it’s hard to make a living out of music nowadays?
Tora: Yes, it is. You just have to be a little bit clever about the way you approach things. You can’t live just from the music, you need merchandise and stuff. You need to be smart in business. There are plenty of ways of making money once you have an established plan, and it’s all about getting to that point. We put a lot of our money into this, but each week and each month it’s more income and it’s going into the right direction. And pretty much all we do, we try to keep in-house. We do all the graphic design in the band. One is a sound engineer and we can do a lot of stuff between this team so we don’t have to outsource things. I think, that’s a business model for a young band, it’s definitely a better way to go.

And do you also need to network a lot?
Tora: Yes, and that was so awesome for this tour. We met a lot of equal people.

Will you come back?
Tora: We’ll be in Mexico for a week and then we will come back.

Do you like Berlin?
Tora: Yeah, but actually we’ve just been here for 15 hours last month. But the moment we landed we said, that it is so green and a beautiful city.

Thanks for your time!