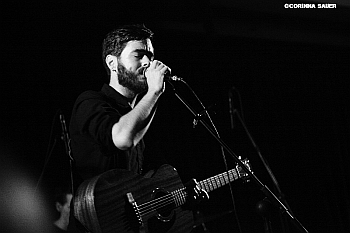 I really understand why Germans love to come to Canada.

You’re from Canada, right? When did you come to Berlin?
Mathias: (thinking) Erm, the first time was in 2008. And then every year since then we would always kind of base our tours in Berlin because the booking agency is here and we have a lot of friends in the city and it kind of became our home base while we’re on tour.

Do some of you always live in Berlin or do you switch?
No, it’s a little complicated: three of the people in the band live in Canada full time and they only come to Europe when there’s a tour. Ariel and I travel back and forth between Europe and Canada. I do that a little because I’m a student and I’m finishing my PhD – trying to finish my PhD – and so I’m here a little bit more often.

Do you study here or in Canada?
No, I study in Canada, but my research kind of has to do with music in Berlin.

I watched your video „Grown-Ups“. Are these people old friends?
Yeah, they’re all just people on the street where we live. It’s a very small town. It’s just the typical guy in Canada.

And that’s really the area where you live?
Exactly.

So the song is a letter to a friend? Did you meet your friend in the end?
You have it right, exactly. I imagined that I get an invitation to a High School Reunion and then I thought „Oah, High School, it was okay, but I don’t want to see those people again.“ It starts with thinking about childhood and teenage years and remembering some nice things,  but then, actually, that’s in the past and I really don’t want to see you again. I don’t want to see any of these people, it’s in my past and I do anything to get over it.

Okay – because the last sentence is so sad. And you repeat it that much. „When you read this…“ What’s happening? Suicide?
When I was writing this song and I came to this line.  I also was like „Oh my god, just what? What will be?“ And I just decided that it stays like this.

I imagined that there was one concrete person you’re talking to.
Actually there was one special person I wrote this song about and he recognized it, when he heard the album.

That’s really really nice. You know, there’s a song from Farin Urlaub, a German musician, about The Smiths and The Cure and I really really love this song and the personal message in it.  Are you on tour a lot in Canada or in the USA?
Not so much in Canada or America. We just played some gigs in August. It’s very difficult in North America, just because of the distances. When you get used to travelling in Europe and in the UK and then tour in America, you’re like „Haha, we have to drive eight hours!“ and here, when you’re in Berlin, it’s just two hours to Hamburg. But we’re still touring in Canada.

And is there a difference between the people? Because Folk is something different in Canada and in Europe.
(thinking) There’s a big difference between Germany and Canada in general in terms of music and culture. In Germany there are a lot   more different kinds of support for music. So you have some states of art. Maybe the state is funding some venue. Or you have the squad scene from the 80’s which is still going on, they’re still putting on music and squads and maybe it’s not only punk rock anymore. They’re supporting a scene. And then you’ve got so many little towns in Germany with maybe one promoter who really is passionate and puts on shows in those little towns like Castrop-Rauxel, Bielefeld or whatever. That doesn’t happen in Canada that much. So, on the other hand in Canada, there aren’t so many types of support for music through all these different channels, but on the other hand there is a lot of support between musicians. That doesn’t exist in Germany.

Really?!
In Canada, where I live, on the East Coast, we know all the musicians and maybe those from the West Coast.

It’s funny because the musicians in Berlin always tell me how good the network works.
Berlin is different. It’s a special case. But in Germany, they don’t have the same kind of need. They don’t need to depend on each other that much. When you go to a new city like Calgary or Toronto or whatever, we have to call our friends and ask them: „Can you put up some posters, can I sleep on your floor, can you feed us?“ and all this stuff and this creates a real strong connection between bands and a very very healthy kind of solidarity between musicians and that’s nice.

That’s interesting because a friend of mine is in a band for maybe 16 years now and they have a big fan base and they’re always connected to different cities all the time. Berlin seems to be different.
Berlin is very different because everybody comes here.

Yes, and you’re right – Berlin is not Germany.
Would you prefer to live in Berlin forever or do you prefer Canada?
Nooo. It may sound funny to you, but it’s really too big for me.

No, I can imagine that.
Even after one week here I get really exhausted by all the traffic and people and movements and buildings everywhere. I think, every Canadian, unless you’re growing up in Toronto or Vancouver, really misses the nature and the small communities and small networks of people and all these things. I really like the city, but it will never feel like a home to me. I need places where I can relax and feel comfortable.

Yes, I can imagine. I am from here and when I am in the countryside too long, I’m like: „Fuck! I need the city!“ I like it, but I’m happy, when I can come back.
For me, it’s like Armageddon, when I travel in Europe or Germany, because there are people! Everywhere! Even in the little places in the countryside, there are people! Two or three days ago we were in Bavaria and we wanted to go swimming in a lake and we came to this lake and had our swimsuits on and were excited and then you get there, it’s just a small lake and there were signs everywhere: „No swimming here! No! No! No!“ I really understand why Germans love to come to Canada. (laughing)

What can I say?! You know, it’s Germany. The cliché is fulfilled. Always. But, on the other hand, in other European countries the water might be dirty or dangerous, so it’s nice to have a sign that says: „Don’t swim here, you’re gonna die!“
When you write your songs, do you write the lyrics first and then the music?
It’s usually at the same time. I sit down and everything happens at once. I’ve tried sometimes to write the music first. Sometimes I try the lyrics first and sometimes it works, but most of the time it just has to happen.

And did I understand it right: you’re alone and the band members change often?
Now, I think, we’re a band. The band exists since 2007 and in the first three or four  years there were a lot of changes because I often wasn’t in the country. We all were in different places, got babies or new jobs or other bands, so there were a lot of changes. But since 2011 it’s been these people.

And do you sometimes write your songs together or are they already done and you tell them how it should sound like?
Usually I have the lyrics and the basic structure. Sometimes we have songs, that we all create together, but most of the time my songs are finished and then I tell them, what to do.

And why do you have this wonderful optimistic name “The Burning Hell”?
Fourteen years ago, I had just finished my first recording at home with a four-track and stuff and I just wanted to make it for me and my friends, but I wanted a name for it. I didn’t feel comfortable using my name and I walked around the city and this crazy Christian guy, Evangelist, gave me this paper called “Burning Hell”! “You’re gonna end up in burning hell!” And I just thought: “Perfect!”