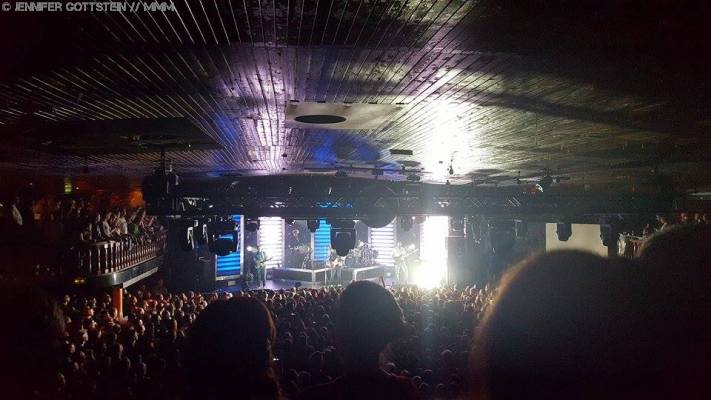 It is a huge change since people are not buying records anymore. If anyone is gonna crack the code it is gonna Spotify.

You are touring now after quite a break. It took you four weeks to make a new album.
Yeah, we finished in the end of 2013 and didn’t do anything for a while, we just had to take a break from the band. We started working on the record in the summer of 2015 so that was quite a short process. And then we were just back on the road again… wait it is 2017, I confused the years!

You are a big touring band, what do you enjoy most about being on the road?
The experience, being in different cities, meet people. It is such a privilege to be able to emerge yourself in places and cultures that not many other people get to. It just feels like living.

What did you guys do in your break?
Alex: I just locked myself in my house and didn’t do anything. It was not a good time.

Kevin: I just did some decoration in my house. I think the major part was to come to the point that we were away for such a long time. There was a lot to think about. To be on that break it was not really that restful.

So it was good for you to come back, too?
Sam: Well, we are on our last day of the tour now and it is good to be back, but I am not really feeling sad to go home. Having a time off gives you a different perspective on where you are in your life. It is so nice to make people happy when you are on the stage. It makes you feel like you have a job to do. One thing I missed massively when we took some time off was the travelling and get to see some cool places. I don’t miss live on a tourbus though.

Your new album was a bit different, sometimes I felt like it is about being lost or being confused sometimes. How do you feel about the message of the album? Am I wrong?
Alex: I see where you are coming from, but I don’t think it is about being lost and confused. I think it is more about searching for the answers more than being lost in confusion. It certainly asks a lot of questions. When we took the break the world really started to change. It was around the time when social media became so big and the internet took over the world. That just made me think about the question how people were changing and the world was changing. I put a lot of that in the record.

What do you think about the change right now which is happening with the “fake news” and stuff, where social media is playing a big role, too?
Alex: There are a lot of things that are happening on a political level that are not good as far as I am concerned but at the same time it is bringing out so much good in the people. That gives me a lot of hope, so I feel very positive about the future. Hatred is never gonna win against love and hope and it never has done. We can have things like Brexit and Trump, but these are things that are on the surface really terrible things. If you take those you would believe the world is a terrible place if you are a decent person, but I think it has taught a lot of us a lesson that we need to be more active and promote peace and love more. Do not rest, don’t be naive. It’s kind of what we needed. A kick in the ass to get up and fight for what we want. Seeing the protests and marches all around the world… people are just good to one and another, so that’s great.

Most of the people listening to your latest album “Gameshow” said that the sound has changed. What inspired you to the new sound?
Well, that’s a very complex question. There are a few years in between and a lot of things changed for us personally. We developed a lot as people, just as human beings. It was the first time since we were in school that we lived life outside of the band. Not being on tour, not being in the studio, not giving interviews, not being in front of media all the time – all of the sudden you go back to what most people would consider a normal life. We discovered just a lot of inspiration, a lot of what is important to us. That affected the album a lot. We are still very young, a lot of stuff changes in our age and we just discover a lot: new films new music, whatever. That can change your life or generally change your view of life, too. Since I moved in a house I started to buy stuff. I have never had the privilege of buying guitars or keyboards and things like that. That is the stuff I love. So I started to buy strange instruments like synthesizers and things and started experimenting with those. That influenced my development. We brought all of this to the studio and put it on the record.

How many guitars do you have?
I don’t know.

More than 20?
It is definitively more than that, yes.

One last question: what is the last record you bought?
Kevin: I was with Sam and I was during last night and I wanted to play a song but I could not find it. This always seems to happen: “Oh yeah, that is a great song, play it” And you think “do I actually have that song?”, so you are looking on Spotify or whatever and cant find it. So I bought a song called “Closing Shot” by Lindstrøm.

Do you usually buy songs digitally or do you still buy records?
Kevin: I used to buy records a lot, but now I am very much embraced by Spotify so digitally buy things only if I want to dj them. Usually streaming.

Alex: I actually signed up to Spotify today for the first time. I think it is a great way to discover new music, but I still buy physical music. I shop a lot on discogs. Amazon is great too, you buy a vinyl record and get directly a mp3download. So you get both. Why would you not do this? So the last one I bought was the new Thundercat record.

Nice. I love the new album. What do you think?
Alex: I haven’t had enough time to listen through it. I only listened like 5 minutes to it yesterday, but I love Thundercat.

Sam: The last thing I bought was “Time To Travel” by Gigamesh.

Do you buy it digitally or physically?
This one I bought digitally, but I use Spotify a lot as well.

Kevin: I love vinyls and albums that I absolutely love, but I also live in London so I don’t have the space for tons of vinyls.

It is interesting since I read a lot about artists who are against streaming or Spotify in general because of the paying.
Sam: You know Spotify is well ahead of everybody else in the aspect of artist support. You have all the other streaming services that are trying to just set the tendency how it goes whether they pay artists money up front or trying to get content exclusively, but Spotify are nurturing artists and learn from artists. They are bringing artists in and talk to them and try to learn from them, try to see things from their perspective. It is an ongoing process. It is a huge change since people are not buying records anymore. If anyone is gonna crack the code it is gonna Spotify.

Kevin: You can’t go backwards. It is different from the past, we are not longer perfect. People who used to be in powerful positions have a little less control. There is so much choice nowadays and so it becomes harder for the big players to handle. Fundamentally to say there is no money in it is just lies, because the labels are making more money than they have ever had. We get paid very well from Spotify.

Sam: Especially for all this talking up that we do (lacht).

Alex: There is so much opportunity for so many people now. That is the best about it and that is what music needs. There is not the small amount of people who are making all the money you get hell of a lot of artists making a decent living. That’s important. It is not about being a super rockstar and be a millionaire. You don’t need millions. We are not extremely rich, but we make a good living. I do not certainly feel the need for more money as long as I can afford my life. That is all you need. I think a lot o this is driven by greed. It is better to have this open field where everyone can have the opportunity to do what they want.

Kevin: You just can’t get paid very well of an average song anymore and that should be a good thing.

Sam: It is awesome because you don’t need to be anybodies fool anymore. You can be at home and record something and put your music on Spotify and all the world can hear it.

Kevin: Globally it is still a relatively small amount of people using the streaming services and it is of these starting ideas. You just don’t sell, you let them stream. Just look at the CDs: you can´t expect to get paid from CDs if nobody buys them. And for streaming there is a lot more money for everyone to share. Spotify also has it problems and it’s own kind of shit going on but no institution that releases music does it for profit.

Sam: It is not this huge under the radar nobody knows what is going on thing anymore. It is so open for everybody. And apple is great in many ways, but the difference between them is that Spotify will actually tell you how many people are listening to your music and they get involved and work with you. And that is not based on anything else than more people are listening to your music.

Alex: Disclosure is the most important thing. The most important thing for music now is for the people at the top to openly admit that they have absolutely no clue what they are doing. When people pretend to know what they do, they fuck it up even further. And nobody knows what the future of music is gonna be we are only trying to get there. You got to admit your lack of knowledge about the future and you got to be willing to fail and accept failure. But we are getting there.

That’s a great conclusion. Thanks for your time guys!