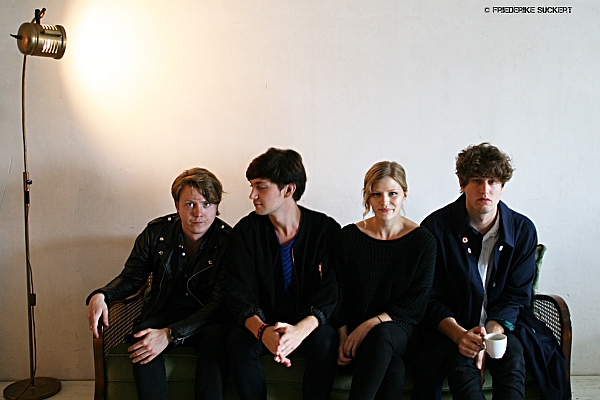 So, in a way every song is a new song for the audience right now – but not tomorrow!

You’re a band for a long time now, but you joined the band two years ago, right?
Hanna: No, almost four.

Do you already have nicknames for each other?
Hanna: Yeah, we have.
Mathias: We all have one except Timo. Of course we all call each other different stuff. When you’re this close for a long time you really know each other.
Timo: We have a name for Jonathan who plays the guitar. We call him Chomper.

Are there any special rituals you do before you enter the stage?
Hanna: We always do a kind of circle thing where we say something.
Timo: It’s a get-together.
Emil: We do something, the direct translation is dry rehearse. And then you sing the songs, maybe with an acoustic guitar.
Mathias: We’re going through and ask: what am I supposed to do? But we’re not actually playing.

You’re very successful, especially in Eastern Europe. Right? When did you realize that it’s possible for you to be successful internationally?
Hanna: Maybe two years ago?
Mathias: We were in Germany with our old band actually. It was the same name, but a different band with different members and other music as well. And I think it started there also. We were around Stuttgart in exchange with a german band, they also came to Sweden and it started there. It was the first experience outside Sweden and we were in Germany and we got a really good response from the crowd and then we realized that we have to come back. Then we did a tour with another swedish band and then it just went on and we got a record label.
Timo: There wasn’t a moment were we could define that it started.

Yes, I thought maybe there was a moment when you realized that it could become bigger than you expected.
Mathias: We’re in the band for a long long time, like thirteen years and it has taken a long process and so I guess we’re not like „Oh shit! What happened?“ We had a lot of time thinking about it and got prepared for it.

How does it feel to hear your own song as a commercial song in TV?
Hanna: I just saw it one time.
Mathias: We also had a couple of songs in TV-Shows and stuff like that. It’s nice that our music can fit in different medias, but we don’t write music with the aim for getting it into commercials or TV-Shows.
Timo: The first time it was weird. It’s kind of strange, but we got used to it.
Mathias: When we made the song for the commercial in Scandinavia we got a phone call one day before it went on air. So it was a really big surprise. So one day you get a phone call and the other you’re on TV in every commercial break.

I’m just asking because in Music-Films it’s like a cliché that the artists hear their song for the first time in the radio and they are always excited and partying.
Timo: It’s always surprising when you hear your song in the radio and I think it will always stay surprising.
Mathias: Yes, it’s weird, but fun of course.
Emil: It’s weird in a good way.

Sure. (to Hanna:) You’re the only girl. Do they think they have to „protect“ you or are you sometimes like a kind of a „mother“ for them?
Hanna: No, I’m not like the mother.
Mathias: In some cases you would be.
Hanna: Only in some cases. I don’t think that we care much about that.
Mathias: The gender thing.
Hanna: Yes, we’re not like: „You are a boy and you are a girl and I have to be like this to you.“
Mathias: That’s right. I guess, we care a lot about equal rights and we think that everyone is a person and an individual and not a boy or a girl. We’re the same, all of us.

Nice. That’s modern. Do you argue a lot about music? Everybody has a different taste…
Timo: Of course we do. It’s impossible to not do that in a bigger group.

I mean, are there sometimes big differences and so you ask each other „How can you listen to that? It’s crap!“
Timo: I think everybody in the group is very open minded when it comes to all kinds of art, not just music. And we don’t judge, whatever you listen to or like.
Mathias: We always can find something good in everything.
Hanna: A little bit of that and a little bit of that.
Emil: I’m listening a lot to the radio. I may not like the whole radio thing, but in every song I can actually pick parts or basslines or melodies that I like.

What about the Song-Writing-Process – do you write your songs in a studio or does one of you bring the lyrics and then you work with it?
Emil: In the beginning sometimes, but we also come to the studio with maybe a half-finished song and we have to write a bridge or something and i think that’s a good way because you are creative and there’s a process and it just happens.
Hanna: When you play together, you can listen to it and change it.

How does it feel when you play a song for the first time on stage? Did it ever happen that the crowd didn’t like the song and you were kind of sad about it?
Timo: Because they didn’t like it? It depends from show to show.
Emil: We had a song, it’s called „Raindrops“ and it’s on the album and we recorded it live in the studio. We also arranged the song in the studio and later on we were in St. Peter-Ording, the surf place. We we’re supposed to play for two hours and they told us a few minutes before the show started so we said „Okay, let’s try that song!“ We never rehearsed it at all and we really had to listen to each other and see what will happen and I really felt the magic there! And also the audience! It was really cool. So intense and beautiful. I think, when you play a song for the first time, there is a special nervousness about it that makes it more authentic. ´Cause when you play a song a hundreds of times it’s hard to feel it back.
Hanna: Yeah, but it takes a time to get into it. You know, when we did „On My Way“ it was a little bit…
Mathias: If you don’t feel comfortable, it can be hard. Especially we have a lot of different harmonies and instruments and stuff like that.
Hanna: I think it can be bad the one time, but the next time it’s really good. It’s hard to say, because maybe this audience didn’t like it, but often we have different kinds of audiences.

And it depends if you’re in a club and the people come just to see you or if you’re on a festival and if you play at a festival the schedule really matters.
Mathias: It’s gonna be a different case now when we play, because the album will be out and the people will listen to it before they come to the show. So, in a way every song is a new song for the audience right now – but not tomorrow!
Emil: Not tomorrow!

Maybe some people can sing the songs along with you.
Hanna: Yeah, that’s fun!
Emil: It’s really cool actually to see people singing the songs. That they’re actually listening to it and can remember the texts. That’s great.

Yes, I think it grows with you. The more you play, the more fans you will get. Do you prefer clubs or festivals?
Hanna: It depends on the stage.
Mathias: Yes, we played at the Berlin Festival and it was really cool because first, there was no one there and then after the first song it was full.
Timo: But I also think that in a club you can get a better sound, which is, of course a good thing.
Emil: You can take your time and make a real soundcheck.
Timo: When you’re on bigger stages it feels more comfortable.
Hanna: I like it, when the stages are higher and not on the same level.
Timo: It depends on the stage and sound…
Mathias: Everything depends!!!
Timo: Jaaa! Always.
Mathias: There’s always a good thing about everything. Clubs are more intimate and the festival gigs are more epic.
Timo: You need both.