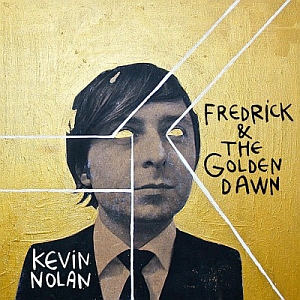 Please introduce yourself to the readers.
Good evening readers, my name is Kevin Nolan. I was born in Dublin City, Ireland. I’m a singer/composer and I write poetry. I’ve just released my debut album entitled “Fredrick & The Golden Dawn” with the Eire Supply label. My second book of poetry which was co-written with artist Susanne Wawra is entitled “Schizo-Poetry – Fragments Of Mind” and will be published in early 2015.

Would you say that you are a professional musician or is it more a hobby?
Neither, it’s not a hobby as I do it nine to five everyday of my life and I’m not professional as I’m not signed to a big label. I’m in a kind of hallowed chrysalis state waiting for the curtains to rise and drama to commence.

How would you describe your music?
My old friend and author Rob Doyle once wrote “Nolan is a seething cauldron full of the literary, the theatrical, and the gothically flamboyant, seasoned with a smattering of infernal burlesque.” He really understood my album. As for my own opinion, my album is a collection of wonder-tales. It sort of fills the mould of an extreme sensibility. It’s in a way a bad reaction to something I ate, I mean emotionally. It’s a refusal to accept the place in which I found myself, a kind of revolt. This album is for those who want to reach outside somehow. It’s a mix of Stereolab, Tom Waits, Captain Beefheart, Steve Reich, Nick Cave, Scott Walker, Bertolt Brecht and Leonard Cohen among others. These are all wrapped up and digested by own my imagination. Then mixed with my sensibilities and regurgitated as a work which had an eight year gestation period.

How did it come that you are so much into German music?
I remember my mother playing Marlene Dietrich when I was a child. Who knows? Maybe my love of German music began there. In my formative years I had a romantic connection with Germany as an open-minded art filled place. I remember hearing about David Bowie and Iggy Pop’s Berlin years and of how Bowie in particular loved German music and even covered “The Alabama Song” as did Jim Morrison and many others. I became aware of Weil and Lenya and loved what I heard. I got more and more into German music. Then a good friend showed me an album called “Tank Battles: The Songs of Hanns Eisler”. I thought these were magical songs and so close to my own musical leanings. I became fanatical about Dagmar Krause, which lead me to the Art Bears and others. I remember going to see Ute Lemper in The National Concert Hall in Dublin City many years ago. She sang many Brecht songs and slowly I just fell in love with this whole German scene. This was the musical language I was looking for as a form for my own expression, these were the songs and the voices.

I read that your music is influenced by Hanns Eisler, Lotte Lenya or Ute Lemper. It´s a very special kind of music – What fascinates you?
In the songs of say Krause, Dietrich, Lenya, Eisler and others there is a particular type of delivery of the lyric which is uniquely German and it’s intoxicating in its dynamic. The emotion expressed is so vital and immediate and the orchestration is also very unique. There is a sense of something real being expressed, something true, something intensely true. The truth is in the performance; it’s in the music and in the voice and the intonation. The music is full of heartache so genuinely and gutturally expressed.  This is something I always wanted to emulate in my own music.

Do you understand the Lyrics?
I don’t speak German, so the only way I ever become aware of the meaning of the lyrics is when I read translations or if I hear a cover version in English. So in a way I have a strange relationship to these songs which leaves much room for imagination. For me this is a real strength as I believe that sometimes in art, a misinterpretation can be more valuable than an correct interpretation. For the reason that, when you hear something that you don’t fully understand, it leaves a beautiful space for which to inject your own personal sensibilities. The misreading is completely your own, and this misunderstanding I find is great food for creating my own music.

Are there any upcoming gigs?
Yes, in January I’m playing The First Fortnight Festival in Dublin City and also lined up for the new year are shows with two artists I really admire. The Revelator Orchestra and Thomas Truax. So I’m looking forward to them.

Do you come to Germany soon?
I’m hoping to come to Berlin and Weimar in late spring.

What are your plans for the future?
My second book will be published in early 2015 and I’m going to tour my debut album for a year or so. Then I’ll go back into the studio for album number two, and so it goes.

Anything you want to tell the world?
“I’ve always been afraid I was going to tap the world on the shoulder and when it finally turned around, I was going to forget what I had to say.”