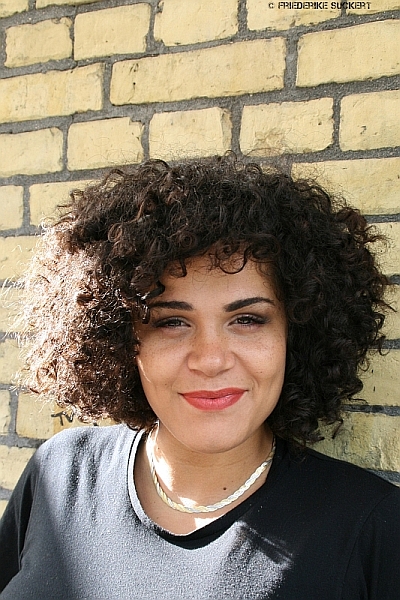 I like working with transgendered people. They inspire that freedom of expression.

Is it your first time in Berlin?

This is my second time in Berlin.

Could you imagine to live here one day?

Yes. The first time I’ve been here I had a great time. I enjoyed the city and visited a few park-outside-jams and an artist community. There were a few little things where I recognized that the artists here are very passionated and productive and doing a lot. I noticed in little bits and pieces, that how kids behave in a city and the environment it reflects what kind of place it is. And I thought the kids behave like they are really free. It seems like they were confident. Is it because of the Wall and the revolution? Is it because of why this city been through to make it more welcoming to creativity and freedom? I just noticed there was a lot of that.
When you have a conversation with someone it’s like having a real conversation and not like „bla bla bla“. The people really do care and also the way of speaking is very different. It’s very straight! I had to get used to it. So I’m thinking about living here. Doing splitting time between here and South Africa.

You could also produce here someday.

My producer is thinking about moving to Berlin as well.

You moved through a lot of places in the world. Your parents are from South Africa and…

One parent is from South Africa and the one is Scottish.

Did you move all around the world to explore the world?

I think so. I didn’t need to live everywhere. My siblings didn’t move as much as I did. Some live in Korea, in Middle-East and they want to travel when they’re older and I grew up moving around and it was just like the way it was, I guess. I was a strong little kid at all. I really wanted to travel when I was very small. And it definitely reflects in my music.

How much did your parents influence your taste in music? I just read that your father worked in radio?

My dad just passed away recently. He was a very controversial character. Maybe indirectly there was some influence there. He liked to shake things up and in media he was very influential and powerful and it was like a tool to lead people and influence people and he helped with certain community issues and those kind of things. However how much my father influenced me I also might have rebelled and didn’t want to do anything with the media and in a lot of ways I am terrible on Facebook, terrible on Twitter and I am forced to tweet, cause this is your agent today. If you make music, you also have to put it out there. You also have to connect to your listeners and have to go on on social media. And you get weird messages on Facebook like „You are cute. You wanna date?“ It’s like „Nooo. How did that happen?“

So, the thing is: on Facebook you accept all sorts of people and you’re not like: Do I know this person? No! It’s like: if they’re gonna buy your record, let your listeners know, where you are. So sometimes I do reply to these people and get into fights… but I don’t know if it’s laziness or that my dad was in the media. I am not the strongest social media person. Definitely not. My plan to make a blog and having a platform for all of my ideas would be amazing if I could be that kind of person. But I’m not. All I do at Twitter is retweeting and tweeting which shows are coming up. What I really use is Instagram. Experimenting with the hashtags. I don’t know. I will know how everything works when I’m 80.

What are your hobbies next to music?

I’m doing anything creative. Writing screenplays, designing a garment… I used to do hair and make-up and I still do different kinds of jobs here and there. I’m a problem solver with a creative brain. If someone needs help with a shoot or a film and needs my help, I absolutely love to help. I like doing style and hair for other people. And I like to cook, long walks on the beach.
I like to work in collaborations with other artists. And I really appreciate other art, people who can paint and draw and sculpt and design.
When you’re creative you probably just do one kind of art. So I’m recovering this idea to do something with it. A friend of mine, a very well known DJ, people don’t know necessarily that he’s also a sculptor. We want to have a a show, saying this is DJ so and so he is doing an exhibit and people don’t know exactly what it is. And then you come to the opening and you’ll see his sculptures.
I also had the idea to do a clothing exhibit. Making clothing out of human hair, because I work a lot with hair. It’s not for the mass market. I know there were already people who did stuff like that. I want to collaborate with a friend of mine who is a fashion designer. And I like to work with transgender people.

I like working with transgendered people. They inspire that freedom of expression. I worked with amazing dancers and singers. I like the idea of dressing how you want to dress although they’re not allowed to and it’s like a dream come true.

You would be happy in Berlin with that!

The thing is in South Africa as much as there is a gay culture it’s still very difficult. In the townships, in the hoods and poor neighborhoods, they’re all very religious, very christian and muslimic and it’s very restricting an constructing and it’s very difficult to come out as a gay person in that environment. So being able to provide a platform for that, it feels like what I’m trying to do with my music.

Just one last question! Which was the most impressive concert you ever visited.

Oh, wow. That’s hard. Hmmm…. I saw a few Björk concerts and she made some beautiful things. Things I would never thought she would do ´cause she’s sometimes so straight and than she did wear big wigs and high heels and you expect a show that should be super simple. And she also does super simple stuff, things that live from that idea and she’s very resourceful with her creativity and I really really like that. That’s how I would like to approach my fans when I’m on the stage.