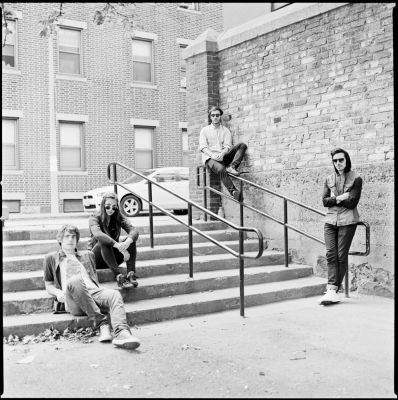 Hi guys, please introduce yourself to our readers.
Hello! We’re Diamond Thug, we’re a indie-rock/alternative-pop band from Cape Town, South Africa., or as we guess you’d say in German: Kapstadt! There are four of us: Danilo (me) (bass), Chantel (vox, guitar, synth), Adrian (guitar, backing vox, synth) and Ted(drums).

Have you ever been to Germany before? Is there anything, you really want to do or see here?
As a band we have never been to Germany before. This will be our first time performing outside of South Africa and Uckeralm is the first show on our tour, so it is a very very exciting one and hopefully the first of many more. However Chantel and myself have been to Germany before and spent some time in Berlin. In fact I‘ve been to Germany a lot of times, my grandfather is German, he lives in Brieselang, in Brandenburg, I’m trying to convince him to come and watch us at Uckeralm haha.
As for seeing Germany, Berlin is my favourite city outside of Cape Town, so I cannot wait to introduce the rest of my band to the vibrance of Kreuzberg or the history of the city. I’ll definitely be taking them to some of my favourite museums and parks, like the Bauhaus Museum, the Holocaust and Jewish Museums and some of the art museums. Perhaps even for a little paddle on the lake in the Tiergarten.
We’re also lucky enough to have a show in Bremen, and that will be all of our first times in that city. We’d love to get some shows around the rest of Germany and will still work towards that.

You are from Cape Town. Beside your gig at Uckeralm Festival, are there more shows planned?
Yes! We’ll be touring through Germany, Netherlands and the French Alps. You can see our full tour schedule on our poster.

How did you come together as a band?
Well I originally met Chantel about four years ago after watching her play in an old band she was a part of. I spoke to her about getting together and making music that tied electronic and live elements together, not really focusing on any genre. We started out and wrote a few songs together and put on our first live show at a venue called The Assembly in Cape Town. Adrian, who I vaguely knew at the time, was at that show and came up to us afterwards asking if we needed a guitarist. I said, nope, but we need a drummer. He had studied drums at university and agreed to join as a drummer. Over time he started playing guitar in some of our songs and so we needed another drummer. That’s where Ted comes in, about two years ago he snuck onto stage past the security officers after our set at Oppikoppi Festival (one of the biggest festivals in South Africa), apparently he told the security guard he was my cousin. We got talking and I heard he had also studied drums in university, I asked him if he’d like to audition and he did so. And I guess that’s our story, we’re a bunch of people who watched the others play at some stage and wanted to be a part of each other’s creative process.

In your own words – how would you describe your sound?
I’d probably call it alternative-space-pop, as a whole our music doesn’t fit into any genre.
Each song could probably fit into a genre, but each song varies a little. We try to write songs based on mood rather than sound. We have similar themes in our music to pop music, longing, desire, ambition, excitement etc. but our approach to those themes in both the lyrics and the music is different to traditional pop. So that’s why I’d say Alternative-Pop, I just add the space because our music makes me think of space and I like that.

Your Debut EP „Monday Will Have to Wait“ was released in January. Did you produce it by yourself or did you get any help?
We were incredibly lucky to work with an amazing team on this EP. We recorded the EP on two continents with two different teams. ‘Miami’ and ‘Beauty Through the Devil’s Door’ were recorded at Digital Forest Studios in Cape Town, with a well established South African producer Darryl Torr. While the other two tracks ‘Mind’s Eye’ and ‘Long Way’ were recorded in Boston, USA with Dave Minehan and Matt Carlson. We were one of 84 bands that won studio slots through the Converse Rubber Tracks Global Takeover program.

When can we expect the Debut Album?
We’re busy workshopping about 14 tracks, as well as looking at writing more. We think we’ll try get into studio at the end of the year to at least start the process. We’d love to have one out next year.

Please tell us a bit about your songwriting process. Is one of you the „mastermind“ who brings the basic idea for a new track? Or how does the way of work look like?
We write songs in a very collaborative way. Often there will be a basic idea that someone brings forward. We normally play around together live experimenting with sections etc. Once there’s a basic idea in place, Adrian and myself will usually try to get a demo recorded using the mini-studios that we have. We’ll then workshop the song further, playing with more detailed aspects such as vocal, synth or guitar sounds or even changing tempo or parts around. Throughout the process everyone has their input on direction and changes. Chantel writes poetry, so her lyrics are often based on poems that she writes.

Please let us know your 5 favorite albums.
Woah! That’s a tricky question!
We’ll focus on our more favourite recent albums otherwise we’ll be arguing for weeks as to which are the top 5.