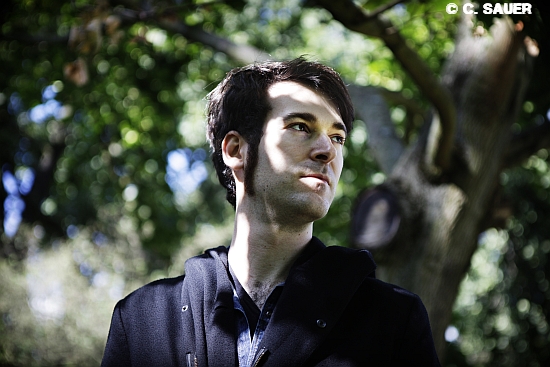 It was a slow and gradual rise to a strong connection with music.

Hi Arnor, nice to meet you. You arrived to Berlin recently. How have you been so far?
I’m pretty good. I’m still a little tired from the journey. I came here the day before yesterday. I have a thousand things to do! There is so much that needs to be prepared for the tour. But I feel good, I like Berlin.

Please tell me a bit about yourself and your music. Let’s start from the beginning: When was the first time that you got into making music and what are your memories connected to it?
Well, that’s a long history, I guess. I started quite late to play the guitar and even later to sing. I got into this place of expression through music, when I was in the army and I had a lot of time. I was serving on this snowy peak- the only snowy peak in Israel. I had a lot of alone time and I had a guitar. I had played a few chords before, but I didn’t really know, how to play. And when I was there, I started feeling the need to say something in a different way, than I did before. So, I found the guitar and I slowly started to find my voice, which was very, very small at first. I was singing in Hebrew in the beginning, before I later on switched to English. But this was really the time when I started discovering this thing… As I said, it was quite late. I didn’t have any musician friends in highschool. I always liked listening to music, but I wasn’t in any way performing music and I didn’t really have a strong desire to do that either. And then it suddenly started coming to me.
After I left the army I started playing a few shows and I even went to music school. It was a slow and gradual rise to a strong connection with music and towards becoming a musician.

It sounds a bit like music found you rather than the other way around.
I don’t know. In the end of the day it was me, picking up the guitar. I think, it’s a lot about circumstances and about decisions. And after that, it’s about making more decisions, like the one I made about moving to London. I was 23 years old. That was a very important decision for me, because I decided to leave my comfort zone and I tried to find something else for myself. Not necessarily only music-wise, but I felt like I needed to continue a certain journey. I didn’t really know, what it was, but wanted a journey. And then I left Israel and I spent years in London.

It was five years?
Yes, but the first year was the most significant for me. Because beforehand I had some experience in writing songs, but hardly any in playing music. And when I was writing before, I hardly ever finished a song. I had snippets, a chorus here, a verse there. Non of the songs I actually did finish were good, according to myself. But then, during the time in London, I was even more isolated, then while I was serving in the army, because I was living in a really old house, I didn’t have many connections, hardly any at all. And what I was interested in most was just staying home and writing songs and sing them. And a lot of the songs that ended up on the first album were songs, that I wrote during my first year in London. And also the language… it flared up inside of me. For me the first year that I lived in London was kind of a click, because I was creating in English and I was also surrounded by English. And I think that was another factor for why it suddenly kinda burst out of me. Like lava.

Since your first album („Like the Tide“) has been released in 2012, you have been playing hundreds of concerts. And I have heard, that your live performances are very special, very energetic. What does this part of being a musician- the performances, mean to you?
It means everything. It’s the one thing that is first and most important. I also love recording, being in studios and working on my music. Yet the energy that occurs when I’m sharing the gift of music with other people and they are sharing their gift of being with me, it creates something, that no recorded piece of music can. And I discovered that after I finished the first album. I worked on that first album for a long time. I had moved from London to Israel and then I started recording the album, which took me about three years. I had hardly played any shows, during those years. And I hadn’t connected with anyone from the industry and I hadn’t thought about how I was supposed to do stuff. I was just working on the album. It was a very difficult process and a difficult time. The first album was completely done by myself. And once I finished it I didn’t know what I was gonna do. Then I Ieft Israel and I went to India for a couple of months to clear my head. During that time I found myself playing every night. I bought a guitar when I was there. I had left thinking, I was gonna stay away from music. And I ended up playing every night in front of people. And then I really understood this thing that is most important to me- that connection that is created between the artist and the audience. That magic that happens, when you are sharing a unique musical experience together. I became addicted to that kind of energy, that I came back from India hyped up and I just wanted to play more and more shows. The first year after I came back I played three times as many shows as I played in my entire life before. And I’m still like that. I just love that feeling that you get when you are on stage. It doesn’t even have to be a stage. I play also living room shows, where there is no stage at all, no microphone. But there is still this energy that’s created when you are sharing something. When you are connecting truly with someone that you can see.

And what about the process of writing your music as opposed to what you described about performing? How do you feel about this more internal part of being a musician?
I write the most when I’m in movement. When I’m displaced. I wrote a lot when I was in India and in the first years in London. Whenever I go abroad and when I find the time- cause for me it’s a lot about allowing the process to take place. When I’m outside of my comfort zone is when I am most creative. Living in a certain place affects the nature of creation. When I look at my first album and at my second album, for me they are very, very different. One was written in London and the other one was written in various places, but conceived and finalized in Israel. So the nature of the place creeps in, sometimes just marches in through an open door.

I think there is some beauty in just noticing that it happens by itself, in a natural process. So when you listen to your music from back then, do you have the feeling of: Ah, this is how I felt back then?
Yes. It reminds me of a really cool saying by W. H. Auden. Do you know him? He’s a British poet and writer and he said: „I read my own writing to understand how I feel.“ And I totally feel that way. I could listen to a song from my first album for example and understand better how I was feeling at that time and even how I am feeling right now. Even though it’s a long time ago. I’m not that conscious of a person in my creating process. It’s very intuitive. I just feel that I need to play this or sing that. I try to make the lyrics coherent for myself but there is a lot of intuition involved. So in retrospect I’m able to read through or listen to the songs and realize things about myself. For me it’s one of the fun things in it. And sometimes in the middle of a show I’m like: „Fuck, that’s what I meant!“ I would sing the lyrics and be: „Oh my God, that’s what it’s about.“ That’s pretty crazy.

So, without analyzing it too much, but what could be your intuitive red line within your latest album „This Light“?
It actually is hard for me to say. It’s consisting of lots of different pieces of music. I think it’s a lot about that energy that I described earlier. That energy that I felt when I was in India, when I was reaching out to lots of people. The first album was very introspective and very inside myself and then I allowed it to come outside. But once I allowed it outside, I also invited people to come inside and I started realizing the beauty of that dual connection. And I think the second album is mostly about that. It’s not just the title track. I mean „This Light“ is all about that for me. The songs are about a shared experience. Sometimes it’s a bad experience, sometimes it’s a beautiful connecting love and light experience. It’s all the different kinds. So if I have to sum it up, this album is about shared experiences.

What’s next for you? What are your plans for the next period?
I would love to do another album. And I would really like to discover some more elements of music to enrich myself and to work on some new material. I’m gonna be playing a lot of shows now in these next couple of months. And there is also something new that’s being created every time you go on stage. The room sounds different, the people are different, the songs are different. There are songs that I wrote eleven years ago and they are still alive and are filled with new life every time I go on stage. And they are completely different from how they were eleven years ago. So the process of creation never really stops. I’m definitely curious to see what will come out from this next couple of months in terms of new songs, new expressions,… I’m within a movement again and like I said earlier, this for me is a very important process and I love it very much. I want to create everything that needs to be created without trying to fit it in one box or the other. Right now I’m in that position, in which I feel that I can do whatever I want as long as I stay truthful to myself.