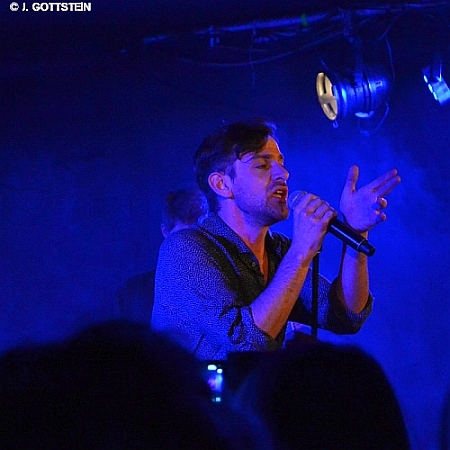 I’ve never really had idols. I just like people’s music.

Josef, you became pretty famous here for covering Rihanna, but I actually do not want to talk about Rihanna that much…
Fanstastic!

…but more about your new album “Night Swim”. There are no further covers on it. Why did you decide not to put the cover on the album and why did you decide not to cover anymore?
Do I need to do another cover? (lacht) Well, I am not a cover artist. I did the cover because I like in my own personal time singing other peoples songs. It’s just something you do when you are a singer. And there was the option of making a lot of money when I had none for doing cover. It’s really that basic and then the cover became a thing, you know. Because unlike I guess a lot of my peers I didn’t come from money, I moved to the other side of the world and that sort of stuff. I made a bunch of decisions to start my career. Otherwise: I am a songwriter, so I consider myself not as a cover artist. So I am not gonna do another cover.

Speaking of your career, it is quite unusual how you became a singer…
Well, I just started writing songs when I was young and kept going. I like singing. And then I moved to London and met Rich Cooper who produced the album with me and then we put out “This Life” together which is the first song I put out in the internet. It all started 2013 and then I got signed and a few months after that I made my album and two and a half years after that I decided to put my album out.

It took quite a long time.
Yes, exactly. Well, for them, yeah. It was actually done right at the beginning of 2014 and then after that came the Diamonds-cover and stuff like that. So, what happened with that was a big surprise.

Now we actually talked quite a lot about the Rihanna-Cover. Let’s change topic: One of my favorite songs on your new album is “Hustler”. I think not only the sound and melody are beautiful, but the text is really inspiring. I feel like you open up a lot in that song.
Maybe a lot more than on all the other songs on the album.

Was that hard for you to open up so much?
No, because I write the songs in my bedroom on my piano. So it is not a scary experience to write the songs. And then once you take the songs to the studio and start performing them there is already a level of dissociation. And I just assume people don’t know what it is about. They probably do, it’s just like in my own little world I think this secret is still safe.

Well, the video seems to be pretty obvious actually…
The video is talking about one part of the song for sure. It is talking about loneliness essentially, but still I don’t think people really know what it is about.

So that kind of keeps you safe in your emotional world?
Yeah, it totally keeps me safe.

And also there is also a little bit of space for everybody to find their own interpretation.
There always will be and I think that is important. People always have their own set of historical experience with which they view everything.

Do you have a special song on the record that is the most emotional for yourself?
“Hustler” is the oldest song on the record so in a way it is the one that has been tested best in the time. It’s been around for such a long time. I wrote it in 2007 or 2008, so maybe eight years right now. But they were all my favorites at a particular point of time. When I would write one I would supersede the previous one. So right now it’s “A Better Word” or “Night Swim”, which are the two most recent songs on the album. I would say these are my favorites right now.

Do you get more inspiration at night?
I think so because it is still. I mean in Australia you are not living on top of anybody, so you have a space, you can make noises in the middle of the night.

What a luxury! The songs of your album are very different from song to song. What would you say, is there a certain musician or artist who is your idol?
No. I’ve never really had idols. I just like people’s music.

Who’s your favorite musician then?
I don’t have a favorite musician. Obviously there are a lot of people I respect. I respect Björk, David Bowie and Blondie. The Band Blondie fascinates me how they kind of didn’t really care about their peer group. Then I really respect new artists, like a super pop artist like Kate Perry. I was obsessed with her for a while because she’s got her line, she sticks to it, she’s unashamedly being herself and she is obviously very intelligent. She is so tenacious, so ambitious and it is not easy doing that. Not easy at all. Just look at Britney Spears with her meltdown. So you know, anybody who does something and they do it well and they are uncompromising about it, just like fucking anybody: Lady Gaga, Marilyn Manson, it can be really anybody. The music is a different thing. It’s about a song can move me. But again anything can move me. I still don’t know what the formula for that is. I don’t know why certain songs work with me and others don’t.

Yeah, that makes sense. Pop stars have to be strong since they are idols for a lot of young people. Do you think you have an exemplary function as a person? You think you can influence young people with the stories in your songs?
I don’t know. I don’t think so. I think people can… I think it’s important actually not to think about that. It’s important not to be creating with that idea in your mind. It is kind of an arrogant thing to do and sit down and say: ‘People are gonna listen to me, so what am I gonna say?’ Fuck no!

It also seems to be stressful and it’s creating so much pressure.
Yeah, exactly. And it’s not the point. I’ve never created something for that reason, I’ve never made music for that reason. I create stuff for myself and if people like it, they like it. If they don’t it’s okay because I made it not for that. At least my first album, the second album will be a little bit harder, but then at the same time I’ll just go: ‘Okay, challenge yourself again! Create new fears and make yourself excited again about what you are doing!’. And so things change and you do something slightly different. And I am writing again. I am incredibly excited about it and not scared, so I don’t want to pressure myself by giving people messages. I think that they should think. And the main thing is: it never works like that! People will never understand what you are trying to say. I’ve noticed that: Everytime somebody tries to communicate something, it’s always the opposite that people end up taking away from it. You just need to stick to your truth and then stuff will happen.

And you get to travel the world.
Actually, that’s not the coolest. You don’t get to see much because the schedules are so tight. Especially nowadays since there is not so much money in music. When you go traveling it’ s so tight! Unless you’re huge I guess, but on the level I am it is supertight.

Sounds like a lot of sress for you these days. You probably need some music to relax. Can you remember what’s the last record you bought?
Well, I use streaming services, I pay for it. And the last album that I downloaded was today…wait I can show you (sucht nach seinem Handy). Actually I downloaded two at a time. I downloaded BORNS, do you know him? He’s an American guy. I downloaded his album to see what his music sound like.

Yes , I’ve heard of him.
Pretty visual suff, I like it. I also downloaded the first album I ever bought, which was Björk´s Greatest Hits. I bought that when I was 14 or 15. I remember buying it because I was standing with those two girls who were a year younger than me. They were my mom’s ex boyfriends daughters and I bought the record and was really excited and they were like: ‘Björk is weird. Why are you listening to Björk?” That was strange because I really loved the music.

Have you heard the latest record by Björk?
Yes, I love it. So, so good. It’s an adventure. She’s the type of person I really respect. She just does what she wants and she’s totally free in her position as a musician.

Yeah, she’s really amazing. Well, before we get off the track to much, last question: Are you writing on new stuff right now?
No, not on tour. It’s too hard to write on tour, for me at least. I need a piano, but straight after the tour I will start writing again. I will be in LA and London as well to write new songs.

Nice. I am already excited and also looking forward to the show tonight!
Yeah, enjoy the show and thanks for coming!