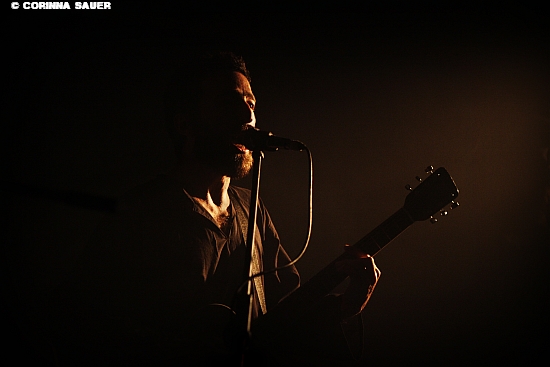 Love, peace and unity. That’s it.

Hi Uri, how are you today?
Good. I had a good sleep, actually.

Did you arrive today?
No, we arrived four days ago. We had a small promotion show on the day we arrived. A party at Sisyphos, a last minute thing. And then we had a few days off.

It’s not your first time in Berlin, right?
No, I have been here many times, actually. With other bands and projects and as a tourist, as well.

I see. Ok, let’s get started. How would you describe your own musical style?
Usually I don’t really like to describe it. But we came up with a definition that quite resembles the sound, and that is mediterranean-psychrock.

Do you feel like this sound kinda found you or was it more like a concept or maybe both?
No, it wasn’t a concept. It just came out quite naturally. And I don’t think, that we are like pioneers or anything. People have done this kind of music many years before mixing oriental motives into rock’n’roll. And this is the kind of music, that I really got to enjoy the last ten years. I also like just psychedelic rock, classic rock or garage rock from all over the world. And often you can hear lots of exotic or oriental motives, that they put into the music. It’s so good.

Yes, I think, it blends  quite smoothly into each other.
Exactly.

How was Ouzo Bazooka born? And how did you guys find each other?
Basically, I didn’t know, it was gonna be Ouzo Bazooka in the beginning. I had been playing in other bands for a while. I wanted to start something new and to go back to my origins at the same time. Those are basically rock music: classic-, 60’s- and 70’s rock. So I started writing the album and then I recorded it with two really good friends. The bass-player, Adam (Schefflan) is the same guy, that plays in the live-band. The drums were recorded by Kutiman. Do you know him?

No…
He’s a video artist and a musician. He plays drums. Also a really good friend of mine. And then we just decided to form a band called Ouzo Bazooka. Adam stayed and now there is Ira (Raviv) on the drums and Dani (Ever HaDani) on the keyboards. We met each other through music a while ago. Dani was playing keyboards in one of my other bands. Ira I met, when I was seventeen or eighteen and I was producing an album for an Israeli singer. So I brought him to play drums and it was just so good… So, yes, we are super happy together. Kind of in love.

Good dynamics?
Yes, really. That is most important. Even if they were or if I was a crappy musician – it’s about the people and how they connect.

How would you describe the music scene in Tel Aviv?
There are lots of bands and lots of singers. Sometimes, it feels like there are more musicians than crowds, especially when you are not dealing with mainstream music. Cause Tel Aviv and Israel as a whole are quite small. I’m not complaining at all. I’m lucky enough to always have enough people attending our shows. So yes, it’s quite small-scale, if you compare it to Berlin for example or to any other big city, but there is still a lot of good music. All types of music, from classic oriental to hardrock, metal, reggae, electronic,… everything. Something is happening all the time and there are more and more musicians. Some manage to go out and tour outside of Israel and some are more dealing with the local crowds.

I heard a lot of people comparing Tel Aviv’s music scene with the one in Berlin. Obviously size-wise it’s different, but it’s maybe the whole spirit, that they are talking about, with bigger and smaller things happening at all times and the whole scene being very alive.
I can give you a small example. In Tel Aviv, there is basically one big club, that has a capacity of between 800 to 1000 people. Just one. There are few other smaller clubs. That can give you an idea. Of course there are also other places, that serve food, where you can play a show, but those are not proper rock-venues. So, I never understand, why it can be compared to Berlin (laughs). I think it’s more about people from Tel Aviv living here, those from Berlin being tourists in Israel and lots of people making friends. So the connection might be more personal and social.

Yes, maybe. You just released your first and self-titled album with Ouzo Bazooka. Please tell me a bit about the process of songwriting. You are the main-songwriter, right? At what point do the others join in?
I remember writing the very first songs, when I was in Prague. I was there for a gig with my other band Boom Pam, which is a bit more surfrock, also Mediterranean, but mostly instrumental. So I was there in Prague with nothing to do. I don’t have any friends there and the rest of the band was just strolling around. So I stayed in the hotel and started writing those songs, without knowing where I was aiming. I just knew I wanted to write some rock songs. Then I started recording the sketches on my computer. After a while I had like 10, 12 songs ready with all the parts, like drums, the bass, the guitar, mostly everything. Then Adam, Ira and I rehearsed a little bit and I brought the songs back home – I had a home studio back then. I invited some guest musicians to play, as well. Now, for the second album, that we already started to record it was different. Again I wrote all the songs, but we did all the rehearsals together from the beginning.

So, I imagine, that’s also a bit of an experiment, since the process of songwriting will most probably influence the outcome.
Yes, for sure.

What does touring in terms of presenting your work to an audience mean to you?
Basically, that’s the goal. To meet the people and to play the music live. For me, the album is still a creation, but the most important thing about making music is the whole social experience. People coming to listen to music together and have a common experience with the musicians. I would never say no to bigger stages and festivals, but I always enjoy much more the smaller venues and concerts, because then it feels as if the band and the crowd are doing something together. It is not a real separation. You can really feel the crowd, how they react and that’s more the kind of experience, that I like. Both, when I’m on and also when I’m in front of the stage at someone else’s show. So, yeah, concerts are the main thing for me about making music.

It’s a nice way to put it, I think, with the interaction of the crowd creating something new, regarding the music and also beyond that.
Yes.

You’ve been very active in the Israeli and also the international music scene since more than a decade and you’ve been a member of various bands and projects. Can you tell me, what Ouzo Bazooka means to you at this point or if you feel, that your musical path kinda lead to it?
I just think, that every little thing leads to another and it’s just where I am now with Ouzo Bazooka. It could have happened five or ten years ago, but it happened just now. Maybe it took me some time to get to the point where I can perform as a frontman of a band, not just hiding behind my guitar and play instrumental music. I’m actually not the kind of person that really likes to be in front, singing and getting most of the attention, having to do all the interviews alone,… it’s not what I’m looking for. I’m more in for creating in a group. And I think, that’s where Ouzo Bazooka goes now. It feels more and more like a band, after starting as some kind of a solo project.

You are a creative person in various ways. You are a musician, a composer and a craftsman. But the red line always seems to be music. Did you know from a very early age on, that you were gonna be making music?
Actually, no. When I was a child, I thought, that skateboarding would be my main thing. Until the age of 13, 14 I took it very seriously- practicing every day for hours, spending most of the time in the streets. I really wanted to be a pro skater. I started to play the guitar, when I was ten, but never too seriously. I always loved music, but I was never digging too much into it. At a certain point, my feet really started to hurt, so I had to quit skateboarding. That’s when I was taking the guitar a little bit more serious. And then my parents actually made me go to this arts-highschool that was the only thing, that my parents forced me to do. I met people there and it just happened. I was spending all my time making music. Then after highschool, I was working in the Israeli opera, doing stage design. Again at a certain point, music took more and more time, so I had to quit the job.

So again, it was kind of an organic process.
Yeah, definitely.

What kind of music inspired you through the years?
At an early age, it was mainly Israeli music. Then, when my younger sister was born, she had a nanny from the UK, that brought a lot of cassettes, with Beatles and Rolling Stones for example, and it really blew my mind. So this is one very important corner stone. Then the first band, that I really loved, was Nirvana. After ’94, when Kurt Cobain died, I started to listen to lots of blues, Jimmy Hendrix,… At the age of about 20, I started opening my ears to local, Metiterranean and to Greek music. I was looking for local influences, that I could put into the music, cause it didn’t really make sense to me to play just rock’n’roll or blues. I was looking for something that I could add from my surroundings. For me, that was bringing more meaning to the music, that I make.

Is there a particular musician or artist, that you would like to collaborate with at some point?
I can not really say that. I just feel lucky to play with the people, that I play with, although I enjoy listening to other music. I have some good friends, that I don’t play with regularly, but sometimes our paths cross and then we manage to work on a project together, produce an album or just play on an album, that somebody else produces. But I never have this wish to collaborate with someone, just because I like their music. It’s always this way, that I meet a person, get to know him or her and then we do something together. It’s more on a personal basis.

Are there any challenges music wise, that you would like to take on in the future?
The only challenge would be to tour most of the year and to get to play in front of as many people as possible. Also of course to continue writing music and recording.

Apart from your music itself, would you say, that you have any kind of message, that you want to share with the people?
Of course! Love, peace and unity! That’s it.

That are great last words. Thank you, Uri.
Thank you.

Women Of The World Festival 2014