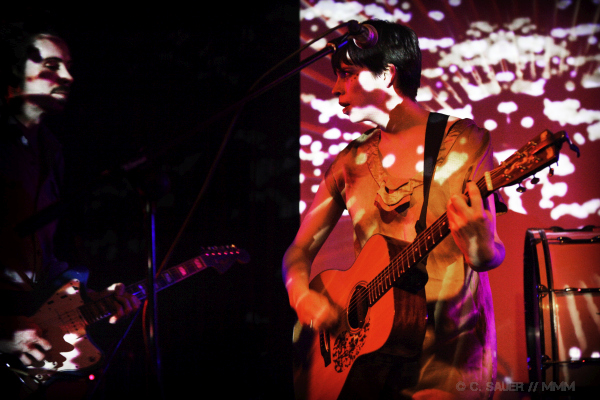 Slowly moving out in concentric circles.

Hi guys, it’s nice to meet you. I’ve been really looking forward to this. Since I saw one of your concerts last year I became a fan of Lola Colt.
Matt: Oh nice. Where did you see us?

I saw you in Berlin, in Berghain Kantine, sometime in spring.
Matt: Ah yes, last time that we were here.

First of all, please tell me a bit about your band history. How did you find each other and how did you find Lola Colt?
Matt: It’s been going on since six or seven years. It started with just Gun (Overbye) and I as some kind of a writing project. There was not much of an idea to get a full band together. It started to feel like something, which was really exciting. We were writing songs, playing music and we were playing to people. James has been a friend of mine for a long time and he just kind of got drafted along the way. There has been quite a few different members since then.

Lola Colt has been compared to certain bands. I heard that someone compared you to Jefferson Airplane for example or to Suzie and the Banshees. People tried to find definitions for your style but it feels like you don’t seem to fit into one specific drawer completely. Your music has a certain timeless quality which is a unique phenomenon. Do you feel like you keep away from the so called pop culture or that you are not so influenced by it or rather that you kinda translate your influences into the Lola Colt universe?
Matt: I think that whenever we created something it’s been quite a deliberate process. Not really an act of jamming and see what happens. And we don’t really have much of an interest in or much exposure to this mainstream music world. It’s just not part of who we are as people. And yeah sure, people draw comparisons I suppose to strong female singers. But the truth is that we really keep writing for ourselves. Our influences changed a lot over time and the sound of the band changes all the time. Different people coming in and out of the band. After a while you can’t really have so much control and it starts to go organically in a direction that is as unique as the people who are in the band. You can’t overthink too much, it just happens.

It’s interesting that you are saying that the process of creating your music is not an act of jamming and seeing what happens, because when I think about how your music feels like to me, it could just as well happen like that. Jamming, improvising, getting carried away collectively and then writing a song with it. That was kinda my idea.
Matt: That has happened before. Some songs have come out in that kind of fashion. And some have been really orchestrated. There is not the one way that we write our songs.
James: No, there is nothing like a formula. We are very open.
Matt: And there is also this thing with having six members. It depends on who is available.

I suppose all six of you come with different musical influences and different ideas. How do you make them blend together during the process of songwriting?
James: As Matt was saying, it really shifted and varies till this day track to track. There was this pretty long period in the early days when Gun and Matt had a real identity, like a stamp. Right after they met and were making those demos. And then you bring other people in and they are trying out how to play the songs and how to interpret them and to make something happen. And it’s such a nice process when the people are getting more comfortable and confident to throw an idea out there. Like „I can reach for this thing over here“, to make something work alongside the existing template. This happens more and more over time. But if you don’t have something quite unique to start with you’d be just kinda trying to find your way around in the dark. But there was this anchor and we just slowly moved out in concentric circles from there.

And who writes the lyrics?
Matt: Gun solely writes the lyrics. That whole side of it – the lyrics, the poetry – is uniquely hers and her mind- and headspace. Quite often musical ideas are written separately. And that’s the deciding point when a jam stops being a jam. Something stops being just a thing out there in someone’s mind, when Gun comes in and says „I have a narrative for this“ or she says that she has a feeling about it. So yes, the lyrical side is quite separate and owned by Gun.

It’s this almost dark energy that seems to come from her. I remember that I was standing there in front of the stage and I was pretty much blown away by her presence. And she sings in a way that you feel that what she voices is directly connected to her.
James: Yeah, I think it couldn’t work any other way. It the way it has to be.

What are your next plans? Are you working on new songs?
James: Yes, there are new things in the pipeline. We are at an interesting stage. Each time you finish a record you think fresh about what you wanna do next time. And actually I suppose having done two albums we feel even more at liberty to explore. We were doing this album before the last one was released. It’s always this way. You finish a record and then it takes forever to release it. In that window you get so excited and you just wanna keep creating. So after the tour we will be back in the studio. Let’s see what happens next.